by Team Koboguide
in Others
10 min read
0

If you’re looking for the best deodorant for women, you’ve got two options: an antiperspirant that stops sweat, or a natural deodorant that neutralizes BO. We researched ingredients, talked to dermatologists, and tested 32 finalists to find products that applied smoothly and left little residue.

We started with a list of more than 200 antiperspirants and deodorants — we wanted to look at as many brands as we could find (although we did limit ourselves to products that could be easily found and purchased either online or in-person).

Then we began scrutinizing ingredient lists. Worthy underarm protection should fight body odor without causing irritation — but the best antiperspirant ingredients are going to be different than the best natural deodorant ingredients.

The most effective, least irritating aluminum

Namely, aluminum zirconium. Five dermatologists all told us this was the best type. “Newer antiperspirants which contain both aluminum and zirconium are most effective,” said Dr. Pariser. And we found a 2015 study that backs this up. Not only that, aluminum zirconium is “less irritating to the skin” than other forms like aluminum chloride and aluminum chlorohydrate, according to Dr. Whitney High, associate professor of dermatology at the University of Colorado.

A formula free of irritants

Underarms are delicate, especially if you shave regularly, so harsh irritants were a no-go. This includes hydrogen peroxide, which Dr. Adam Friedman, associate professor of dermatology at George Washington School of Medicine and Health Sciences, (sarcastically) told us is “great if you are looking to cause an irritant contact dermatitis.” Simple alcohols like isopropyl alcohol can lead to similar issues, so we nixed them too. And to find an antiperspirant suitable for women with sensitive skin, we looked for products with no fragrance or perfume: These two words can mask a slew of potentially irritating chemicals.

Remember how it’s bacteria that cause body odor? Just in case any sweat should sneak past the aluminum zirconium, we wanted a bacteria-fighting ingredient in our arsenal. Triclosan, banned by the FDA in 2016, is no longer an option. That left us with C12-15 alkyl benzoate. “It’s generally considered to be safe and provides emollient and antimicrobial benefits,” said Dr. Audrey Kunin, dermatologist and founder of DERMAdoctor.

Since so many natural deodorants were developed in response to concerns about aluminum, we decided to avoid the ingredient altogether. This also meant weeding out potassium alum, a mineral form of aluminum used in some “natural” products, including Tom’s of Maine and Crystal.

As with antiperspirants, we excluded products that contained simple alcohols, benzoyl peroxide, and fragrance/perfume. To be extra careful, we also weeded out products with propanediol and propylene glycol, which “are no longer being used regularly due to some data that they might be harmful,” according to Ron Robinson.

Our experts referred us repeatedly to three key odor-neutralizing ingredients. So we looked for deodorants that contained at least two of the following: coconut oil, baking soda, and zinc oxide. 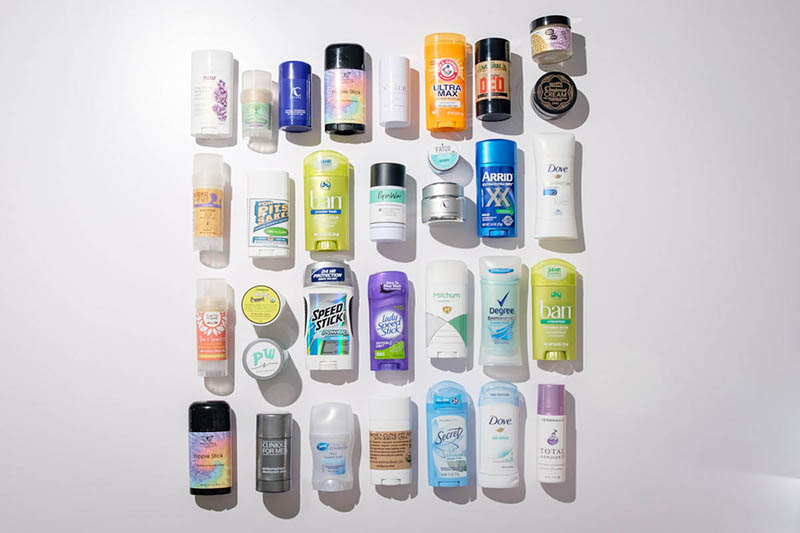 Tested for smell, application, and residue

Subtle scents that last all day

Scent is subjective — so what were we looking for? Aromas that were subtle and fresh, not overpowering or cloying. We sought input from a dozen test users and struck out any products that were overwhelmingly unpopular. Of course, the way a product smells on your body is more important than how it smells in its packaging, so we also applied each product, let it set for two hours while we went about our day, and then came back for a second sniff test.

When it came to application, we felt a little like Goldilocks: we wanted a product that struck just the right balance between wet and gooey versus dry and crumbly. After applying each solid, gel, and cream, we took notes and gave preference to the products that glided on smoothly with a satiny finish.

We also created a residue test to see which formulas were more prone to rub off on our clothes rather than stick to our skin. After two hours of wear, we rubbed a swatch of dark t-shirt fabric across our underarms and nixed products that left the most vivid, chalky white streaks. 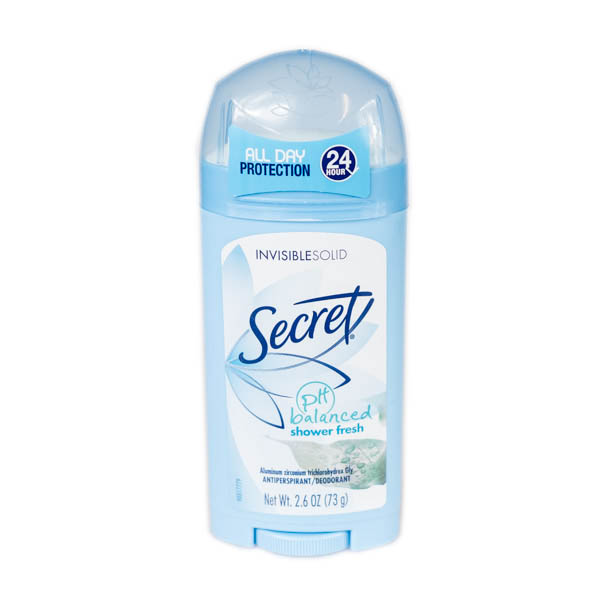 Of Secret, one tester commented, “This went on perfectly. It didn’t feel wet or liquidy.” And Dove was lauded as “smooth, not chalky.” Where Secret pulled slightly ahead was its long wear. At the end of the day Secret still left no clumps in our underarms. Dove, by comparison, seemed to “get flakier throughout the day,” according to one tester.

Our testers found Secret’s fragrances the most pleasant out of the competition, and unlike some, it didn’t increase in intensity throughout the day. It smelled subtle and clean, the sort of scents our testers said they would be happy to have on all day. The formulas contains bacteria-fighting C12-15 alkyl benzoate and aluminum zirconium.

Though it left less white marks than other contenders in our T-shirt test, it’s residue was far from invisible. A long day in dark clothes will be marked by this deodorant. If you want a truly incognito deodorant, both of our natural picks left nothing more than a light dust. 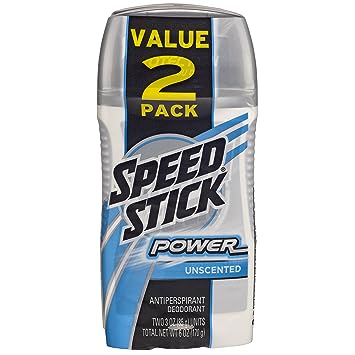 Speed Stick earned a slight edge when it came to application. It’s domed surface was pretty standard, but it went on dryer than most. Ban, by comparison, felt a little too wet, like it was melting into our skin, while testers described Speed Stick as “just moist enough for a smooth glide.” The deodorant will go on soft and dry quick.

Based solely on the packaging, you might assume the Speed Stick is for men. But — as we learned — the main difference between men’s and women’s antiperspirants is scent. When you’re looking at unscented products, that difference becomes moot: We just wanted something that would work. And this deodorant is certainly scentless. Where other “unscented” antiperspirants had faint hints of musk or soap, the Speed Stick was waxy (if you really stuck a nose to it).

While it wasn’t the worst offender, the Speed Stick certainly left its mark during our T-shirt test. You’ll be hard pressed to find an antiperspirant that is truly invisible, and natural picks will be a better bet for that feature. 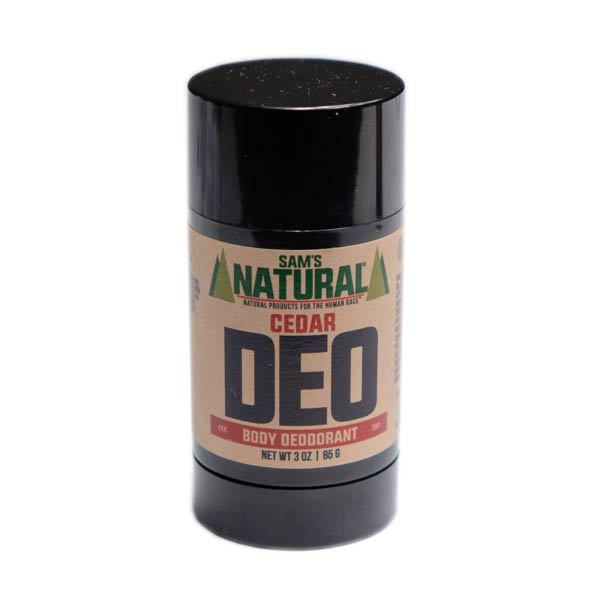 Of its 15 available scents, Sam’s offers one marketed specifically for women, with lavender and clary sage essential oils. (The type of oil was the only difference between the men’s and women’s formulas.) Our testers loved the faintly herbal, faintly citrusy aroma and were pleased to find it lingered even after two hours of wear.

As for application, we liked Sam’s circular stick. After trying an assortment of natural deodorants — some circular sticks, some ovals, and some creams — we tended to prefer the rounder ones. They fit more snugly into our pits than ovals, and as a result left less gooey excess on our skin and on the rim of the stick (an especially important consideration for natural deodorants, which can have a creamier, softer texture than traditional antiperspirants). And compared to the creams — which required dipping your fingers into a jar, rubbing the product into your skin, and then washing your hands — sticks were much less messy and time-consuming. 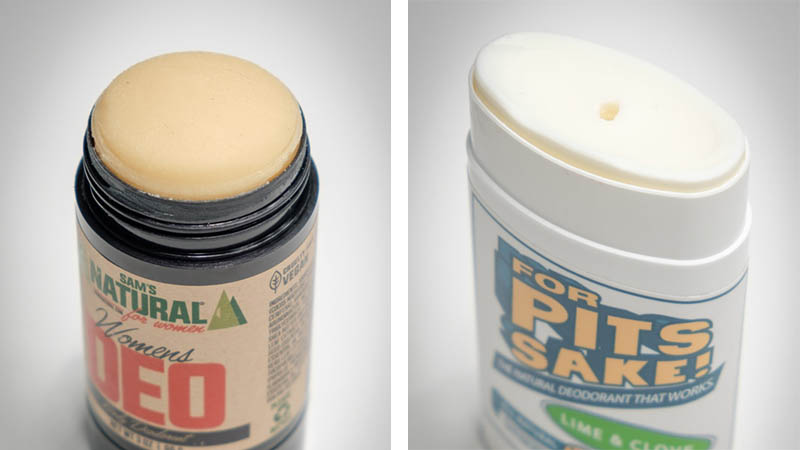 We preferred the circular shape of Sam’s Natural Deodorant. It was easier to apply than the oval-shaped tubes we tested.

Natural deodorants typically run at a higher price point — its ingredients and manufacture process are more expensive. Sam’s costs about $10 for 3 oz., it’s triple the cost of our antiperspirant picks. 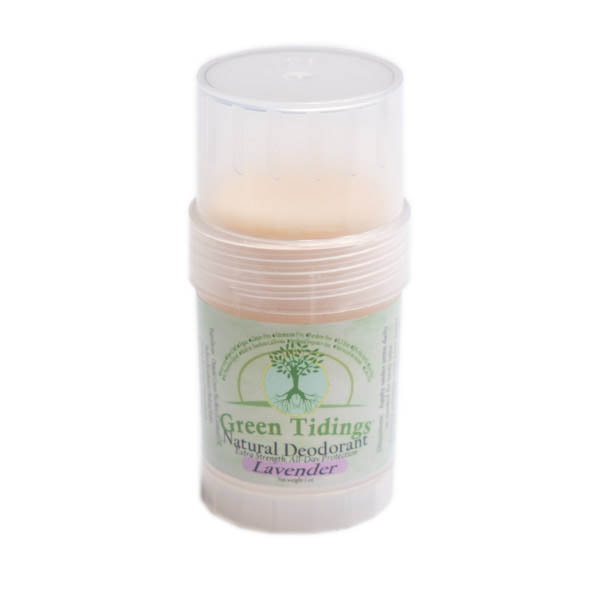 Green Tidings
Baking soda, coconut oil, and all certified-organic ingredients
Pros
Organic through and through
Gentle in scent and application
Cons
Expensive

Organic through and through

On the hunt for an organic deodorant? Look no further than Green Tidings. The rigors of sourcing organic ingredients (as well as manufacturing the product in a solar-powered facility) are impressive. It’s also vegan and cruelty-free. The deodorant uses baking soda and coconut oil to battle sweat and stink, with shea butter for moisturizer.

Gentle in scent and application

The gentle lavender fragrance of Green Tidings appealed to testers’ noses, especially when compared to AC Nature, which some of our testers likened to Play-Doh — and reported wore off entirely after two hours, revealing body odor. As for application, Green Tidings’ round stick felt perfectly sized for our underarms. Unlike products from North Coast Organics and Bubble and Bee, excess gooey product didn’t accumulate in our armpits or smear onto the edge of the tube’s rim.

Green Tidings is our most expensive deodorant pick, at about $8 for a one-ounce tube. It’s a costly product to make because of its sustainability standards. But if buying organic is a priority, Green Tidings can’t be beat.

The Difference Between Antiperspirants and Deodorants

Aluminum forms a gelatinous plug that stops up your sweat glands, preventing more perspiration from seeping out. Without sweat, bacteria have nothing to dine on — hence, no body odor.

Even over-the-counter antiperspirants are regulated by the Food and Drug Administration (FDA). In its final monograph, the FDA states that products marketed as antiperspirants must reduce sweating by at least 20 percent in user tests that the FDA has verified (Section IIC, Comment 9).

Odor is neutralized by deodorants

A deodorant, in the strictest sense, will not contain aluminum or prevent perspiration. Instead, deodorants mask and neutralize the odors that bacteria emit. The masking part is fairly simple: synthetic fragrances and plant-based essential oils can be used to cover up smell. As for neutralizing, products can rely on everything from the modern-day antimicrobial C12-15 alkyl benzoate to good old baking soda. Many products are labeled antiperspirant and deodorant, in which case they’re relying on a combination of both processes.

Some people fear that regularly applying aluminum to the underarms could cause it to accumulate in the bloodstream, leading to Alzheimer’s disease and cancer. The National Cancer Institute, American Cancer Society, and FDA have all examined the issue and concluded that aluminum-based antiperspirants are safe. But many consumers still opt for aluminum-free deodorants — often marketed as “natural” deodorants.

Men’s and women’s products are the same

Ad campaigns make it easy to believe that the sweat coming out of a man is different than what comes out of a woman. But according to a recent study led by Sean Notley, Postdoctoral Research Fellow at the University of Ottawa, that’s not the case.

“We found that sex could explain a maximum of about 5% of individual variations in sweating,” Notley told us. “A more active female may need a stronger antiperspirant than a male who sits at a desk all day.”

Notley’s research had us wondering: do men and women really need different deodorants? Dr. David Pariser, Senior Physician at Pariser Dermatology, told us, “in terms of active ingredients, there’s no difference between men’s and women’s products. The main difference is scent.” Cosmetic chemist Ron Robinson, of BeautyStat.com, seconded the notion. “It’s really about personal preference for scent and application style,” he said.

So consider our top picks for the best women’s antiperspirants and deodorants your starting point. We’ve narrowed a field of hundreds down to a handful of options. If you don’t like one, try another — and don’t rule out the possibility of going for a “men’s” product.

sunglasses for round face

sunglasses for round face