If you do your washing on the go, you know how important it is to pick the right portable pressure washer. With so many options now available, where do you even start? We’re here to help.

This year we’ve gone the extra mile to narrow your search. We’ve compiled these lists of the best-selling, top-rated and expert-recommended mobile pressure washers for you.

Thankfully things have moved on and the very latest portable washers now feature cordless battery power. These are not cheap but both of the washers featured here can hose off a bike in a matter of minutes and if that means less time freezing your arse off, we definitely think it’s a price worth paying.

Unlike Bosch Fontus, the Worx Hydroshot doesn’t have a water tank but it does have a 10m water hose, which you can dip into any third-party water source. It also has a filter on the end, so you can use a dirty water such as from a puddle, stream, lake and apparently the sea! You also get a fold up bucket, into which you can collect water, you can also clip a standard garden hose and there’s also an adapter for the bottom of the lance to screw on a mineral water bottle. If there’s water out there the Hydroshot will let you access it.

The Hydroshot lance has three pressure settings and the nozzle rotates to offer five different spray features from a powerful jet stream to a wide fan spray for dousing the bike. Worx claims 2.5Mpa water pressure (about 25bar), which is twice that of the Bosch but in use both units felt pretty similar.

Powering the Hydroshot is one of Worx’s Powershare 20V MAX lithium-ion battery batteries, which means it can be shared with other Worx devices. The Hydroshot is even available as a ‘body only’ for around £80, should you have a device with one of the batteries included.

In terms of cleaning power, the Hydroshot is more powerful than a garden hose, so will shift stubborn dirt but it’s not as damaging to paint work and bearings as a full-on jet wash. There’s plenty of grunt to clean mud from tyres and most of the cavities on your bike and on a single charge run time is over 20mins, which weI found is enough time to clean one bike really thoroughly.

When using the Hydroshot it feel quite as solid as the Bosch but it’s half the price and, being able to tap into multiple water sources, is a bit plus when cleaning at the end of a ride.✕Skip in 5

At 7kg the Bosch Fontus is about the same size and weight of a medium wheelie bag, it even comes with a pull-out handle and sturdy wheels so you can drag it about. However, once you fill the tank it tips the scales at over 20kg so getting it in and out of a vehicle is an effort but it does have a 3.5meter hose so you can leave the unit inside when cleaning in the field.

Unlike the Hydroshot, which just comes with a bag, the Fontus has built in storage for the hose, spray gun, smart brush head and battery pack. The spray gun is also smaller and easier to handle and comes with four different spray patterns. Combine these with the three power modes and you to really dial down the pressure when cleaning delicate areas like bearings and suspension or boost it for stripping dirt from your frame and tyres. Bosch says the Fontus delivers a claimed pressure of about 12bar (1.5mpa), which is about half that of the Hydroshot but running both units side-by-side, the Bosch actually seemed slightly more powerful.

Plugged into the Fontus is one of Bosch’s standard 18V Lithium-Ion batteries, which is interchangeable with other Bosch tools and accessories. The company claims a one hour run time but since we got through a tank of water in about 10-15minutes, it just meant we didn’t have to charge it that often between cleans.

The Bosch Fontus is heavier, more expensive and less portable than the Worx Hydroshot but it feels top quality, has a greater run time and you don’t have to hunt around for a water source.

Also worthy of a mention… 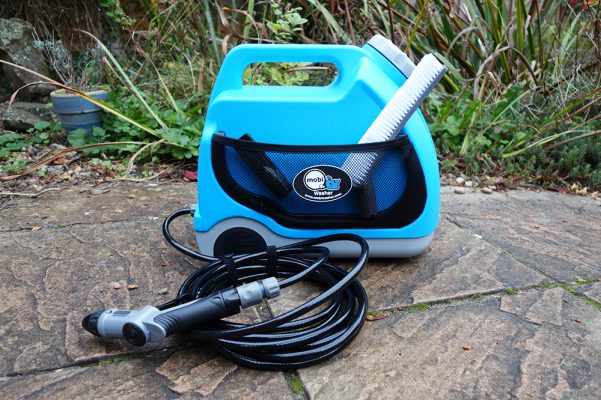 The Mobi V-15 is one of those bits of kit that deserves a space in the boot of every rider. Simple to use and with neat attachments it makes cleaning your bike at the end of a ride a much less painful process.

Although the difference between these two cordless cleaners is basically having a water source included or not, in reality it’s not much of a big deal simply because you can buy a 23litre plastic jerry on-line can for about tenner. Stash this in the boot of your car with the Hydroshot and you’ll have more than enough water to clean several bikes.

The Bosch Fontus is slightly less portable than the Hydroshot but it feels better quality and has some really nice features, like the compact brush/gun, pull out handle and internal storage. It’s also a proper stand-a-lone system, which makes a difference if you don’t want to lug around lots of separate containers or have to scout about for a water source.

Either of these cordless cleaners will make washing you bike less of a chore but the Hydroshot will cost you less and is the better choice if you’re pushed for space or struggle to access a reliable water source.

It's never been a better time to buy a 4K HDR TV for gaming, as the enhanced consoles have become...

When choosing the best TV for movies, it's important to consider your TV room's lighting conditions. You'll generally have a...

4K resolution used to be an expensive step-up feature that was only available with a high-end TV. But nowadays, just about...