The big question isn’t whether you should use mouthwash, but which mouthwash is best for you. Faced with a bewildering range of options? We’re here to help you out.

How to buy the right mouthwash for you

How do mouthwashes work?

Mouthwashes all have a few things in common. They’re all designed to inhibit the build-up of plaque, and they generally have a strong-tasting, strong-smelling mint flavour that’s designed to freshen up your breath. The key ingredient, as with toothpaste, is fluoride. This protects the teeth from the acid erosion that occurs when plaque bacteria meets sugars in the mouth, by reducing the production of acid. It can also strengthen or repair any lost enamel. Most high-quality mouthwashes will have a fluoride level of 200 to 250ppm (parts per million).

Some mouthwashes include additional active anti-bacterial or antiseptic agents, including cetylpyridium chloride (CPC) and sodium bicarbonate, germicides such as Triclosan, along with sodium chloride, which can loosen debris between the teeth and freshen breath.

Should mouthwash have alcohol or not?

Many mouthwashes use alcohol (specifically ethanol) as a carrier for their active ingredients. The amounts are small and, as you don’t actually swallow the mouthwash, you don’t need to worry about getting sloshed: there’s a slight rise in the alcohol content of your breath, but this fades away after around ten minutes. However, alcohol can dry your mouth, causing it to release the stinky sulphur compounds that can compound halitosis. Some studies have also suggested that alcohol mouthwashes could increase the chance of developing oral cancers – although this hasn’t been firmly established. For these reasons (or on religious grounds) you may prefer a non-alcoholic mouthwash. 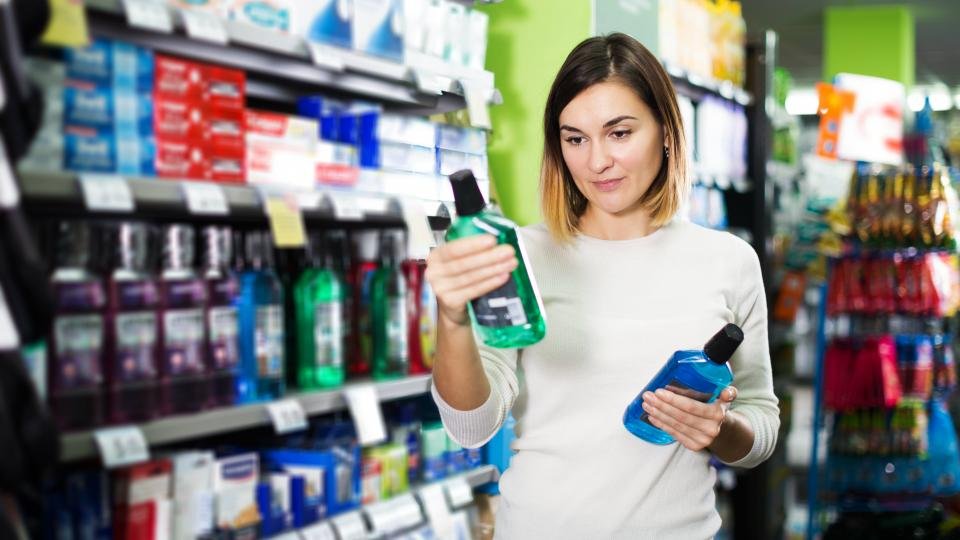 In addition to your standard mouthwashes you’ll also find formulations specifically designed to combat gum disease or whiten teeth. The former type mostly contains chlorohexidine or hydrogen peroxide. This can be very effective, but it leaves the mouth with a strong aftertaste and often a numb sensation. Worse, if you use a powerful chlorohexidine mouthwash over long periods, your teeth can get discoloured – although if you buy a “daily” mouthwash it will contain a lower concentration that shouldn’t cause problems.

Hydrogen peroxide meanwhile can have its own undesirable side effects, including swelling or irritation in the mouth for some users. Since it’s a bleaching agent, it can help whiten teeth temporarily, but not to the same degree as a good whitening toothpaste.

Some mouthwashes can be rough on sensitive teeth, but you can find variants designed to protect your tender nerves, either by using an active ingredient like arginine to repair the enamel and cover them up, or by applying ingredients that numb the sensitive parts.

How to use mouthwash

It’s important to understand that mouthwash isn’t a cure-all dental potion. If you’re concerned about gum disease, tooth decay or bad breath, it’s no substitute for brushing twice a day, properly, top and bottom, front and back, for two minutes every time. When you do use mouthwash, keep it in your mouth for a good thirty seconds before rinsing. And try to avoid doing it immediately after brushing your teeth: you could actually be rinsing the helpful fluoride in your toothpaste away.

1. Listerine Total Care: The best all-round mouthwash – if you don’t mind the sting 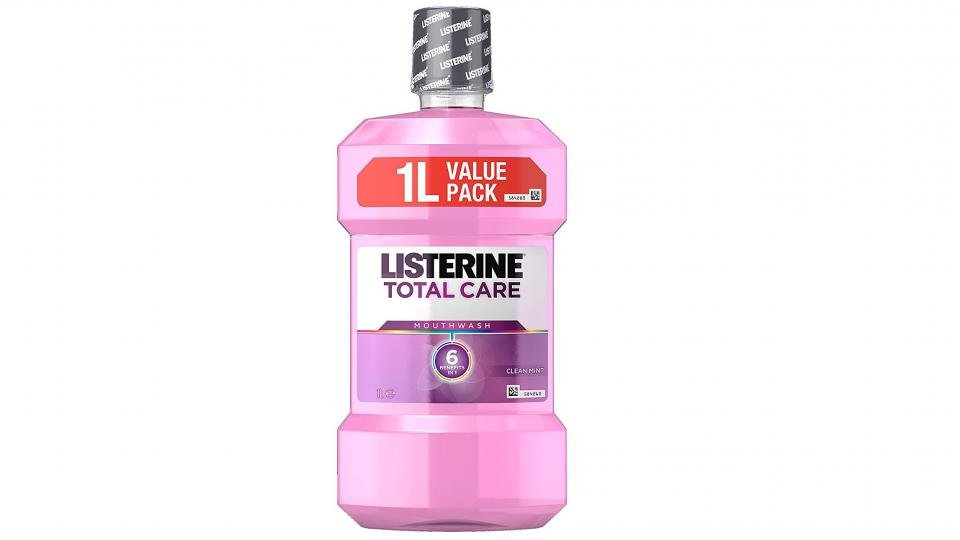 Listerine dominates the mouthwash market, and Total Care is its flagship product. Boldly, it claims to kill up to 97% of germs, while reducing plaque by up to 56% more than brushing alone. If that’s not enough, it also takes care of tartar, bad breath and gum disease. Regular users feel it does a great job of cleaning and battling bacteria, not to mention freshening breath and strengthening teeth, with ingredients like menthol, eucalyptol and benzoic acid that contribute to its powerful, minty taste. The downside is the classic Listerine “sting” which some people love but some people hate. If you’re in the former camp you won’t want to use anything else, and there’s an alcohol-free version – Total Care Zero – for those who want to avoid the slightest contact with booze. 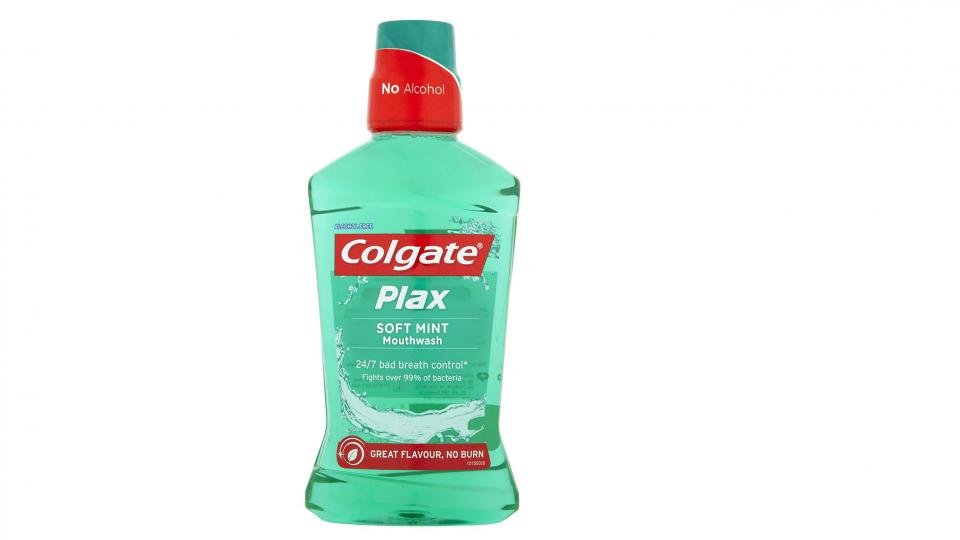 If you don’t appreciate the full-on taste of Listerine, try Colgate Plax Soft Mint instead. This mild-mannered mouthwash contains no alcohol and has an easy-going minty flavour, without a hint of sting. It has the same fluoride content as more expensive, dentist-promoted brands, to protect against plaque and keep your teeth and gums feeling healthy, and it’s cheap too – what’s not to like? 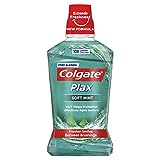 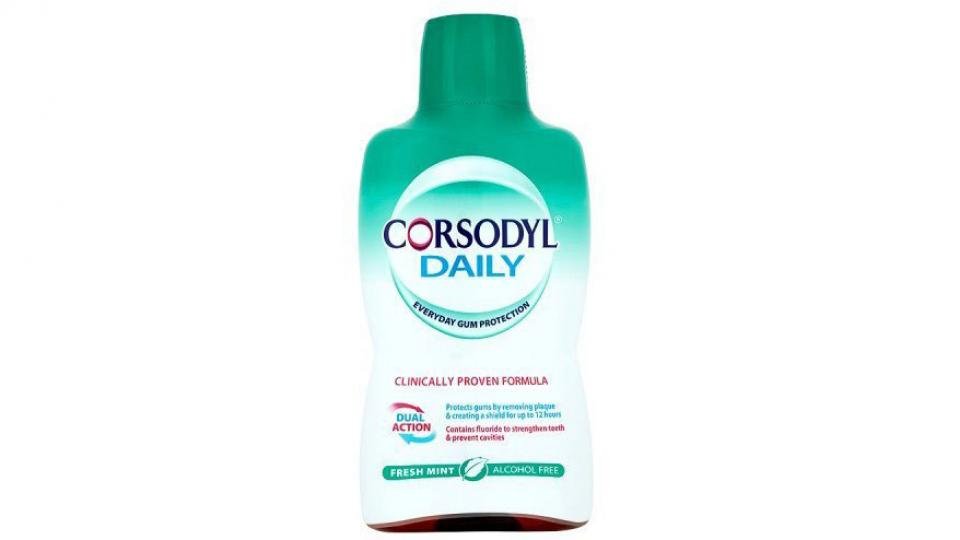 Corsodyl is best known for its intensive treatment mouthwashes, which are intended to sort out chronic gingivitis but can stain your teeth. Corsodyl Daily has lower levels of active ingredient chlorohexidine, so it’s suitable for long-term daily use. The strong taste is just about masked by the fresh mint flavour; it can have a slight numbing effect, but it’s a whole lot gentler than the non-daily version, and still works hard to reduce plaque bacteria and treat your gums. There is some risk of staining, particularly if you drink tea, wine or coffee within an hour of use, but nothing you can’t address with regular brushing. If you struggle with gum disease, this is the mouthwash for you. 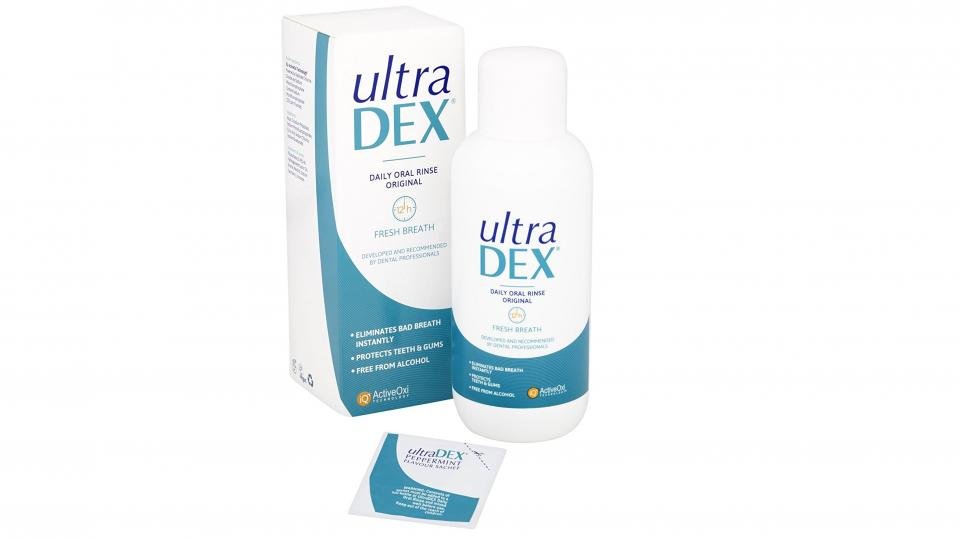 UltraDex is formulated to eliminate the sulphur compounds that cause bad breath, while avoiding ingredients like alcohol that cause dry mouth and exacerbate the problem. The “iQ+ ActiveOxi” recipe, using chlorine dioxide and sodium monofluorophosphate, works for up to 12 hours; users generally report that it does improve their breath, while fluoride and sodium bicarbonate are included too to inhibit bacteria and protect the teeth and gums. It looks and tastes a bit medicinal, particularly if you don’t add the optional minty flavour that comes in an accompanying sachet, but if you suffer from halitosis it’s well worth a spin. 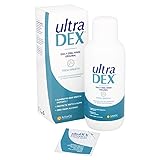 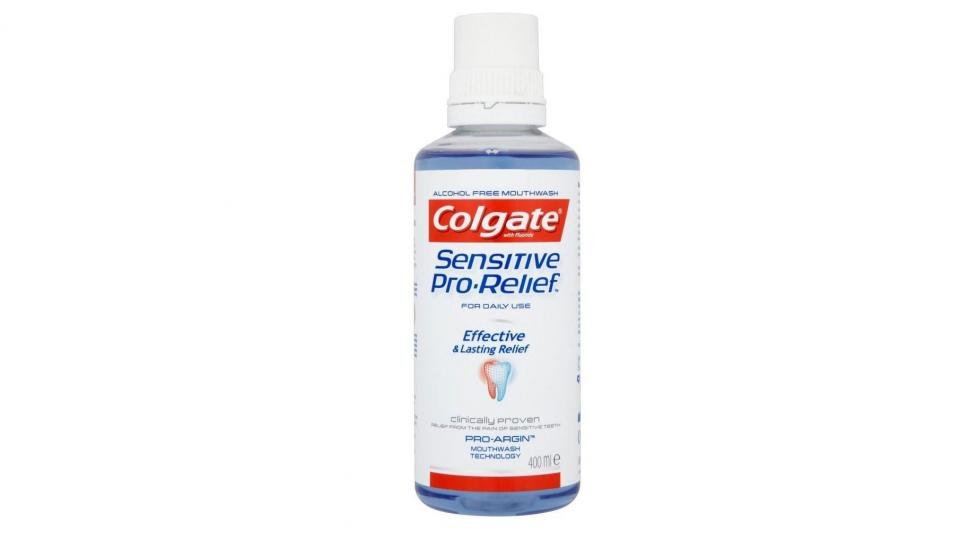 If hot drinks or ice cream make you wince, your best bet is a sensitive toothpaste – and you can back this up with a sensitive mouthwash too. Colgate Sensitive Pro-Relief contains an active agent dubbed pro-argin, which coats the open dentin tubules – the small canals in the tooth that extend from the pulp cavity to the enamel and contain those hypersensitive nerves. It doesn’t numb the poor devils instantly, but the longer you use it the better it gets, especially when combined with a sensitive toothpaste. It contains fluoride too for general protection, and the alcohol-free, soft mint flavour is easy on the mouth and gums. Try it, and you’ll soon be chomping on lollies without a hint of discomfort. 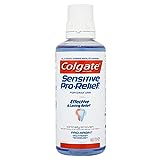