DJI’s $349 Osmo Pocket shoots in HD or 4K resolution, and once you’ve captured your footage, you can offload it via a USB-C cable to your PC or export it directly to your phone via the DJI Mimo app. It’s a very capable camera, but it falls short of being the all-in-one vlogging powerhouse that it aspires to be.

OUR REVIEW OF DJI OSMO POCKET 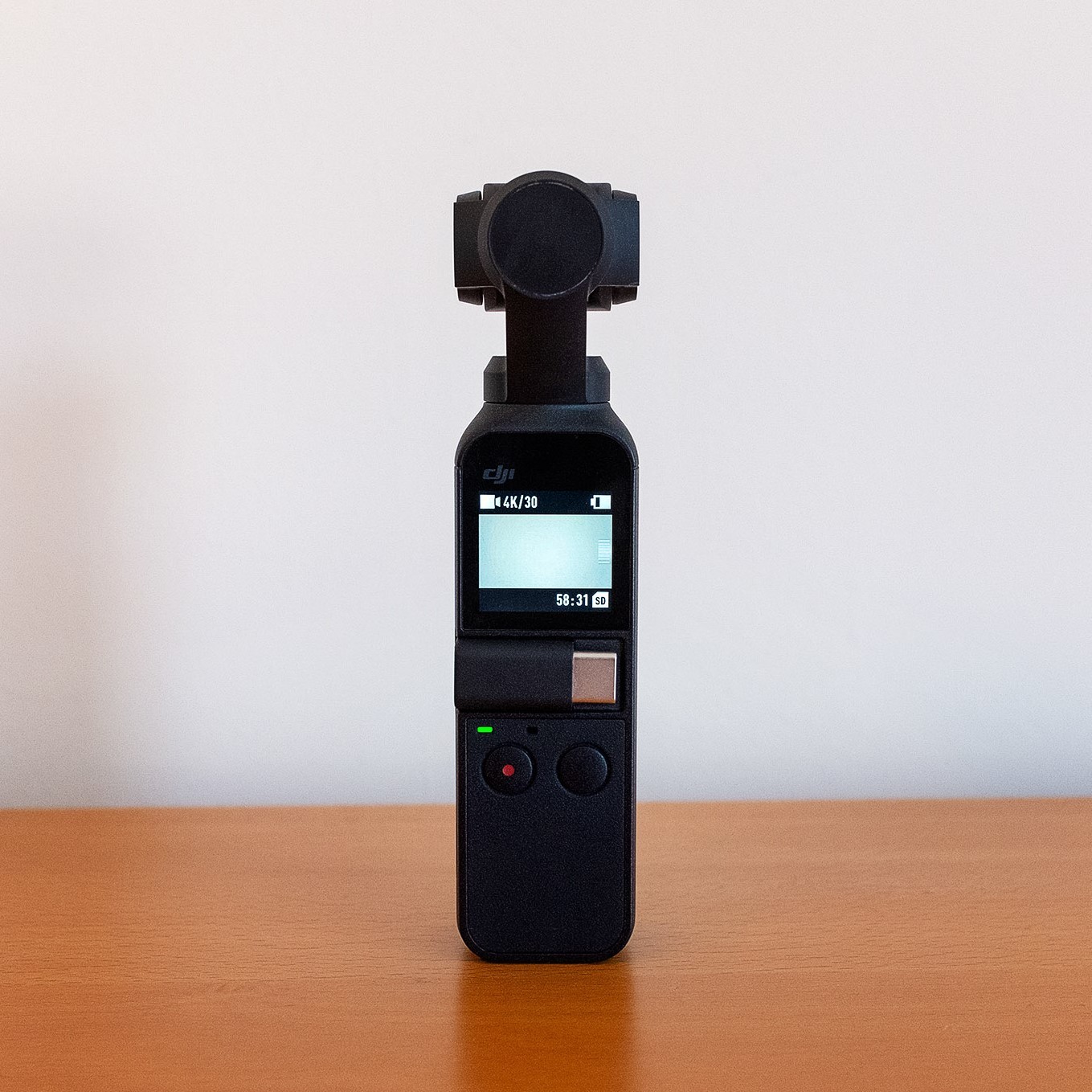 The centerpiece of the DJI Osmo Pocket is its three-axis stabilizer. It’s a compact and proficient mechanism, and the Osmo Pocket is keen to remind you of this. Every time you turn the camera on, the gimbal rotates one way and then the other with a satisfying click, like it’s doing a morning stretch after getting out of bed.

As a whole, the camera feels solidly built, but the gimbal mechanism seems delicate. You’re not going to take the Osmo Pocket to many of the locations where you’d use a GoPro Hero 7. DJI’s camera isn’t waterproof, and I worry about dropping it onto concrete, let alone using it to capture myself skiing down a mountain.

DJI’s handheld camera is much better suited for vlogging. Its long handle is designed to be held rather than strapped to the side of a helmet, and its gimbal won’t even be able to move properly if you don’t give the camera enough space.

Beneath the camera, there are a pair of buttons — one multifunctional and one for recording video and taking photos — and a small one-inch touchscreen. The camera also comes with a small, removable pair of connectors (one USB-C and one Lightning), which you attach to the camera. These then allow the Osmo Pocket to be fixed to the bottom of a phone and held horizontally to allow you to control the camera using your phone’s touchscreen or transfer your footage. When not in use, the connector can be flipped around so it doesn’t protrude.THE OSMO POCKET CAN BE EASILY ATTACHED TO A SMARTPHONE, BUT THAT MAKES IT MUCH MORE BULKY

The one-inch screen is tiny, so it’s got a basic user interface that’s designed around four menus that each swipe in from a different side. You can use these to change settings like the resolution you’re using or putting the camera in selfie mode. As you’d expect from a touchscreen of this size, attempting to use it directly is a bit of a pain. The menu options are small and hard to tap accurately, and swiping the bottom menu upward can be a challenge when you’ve got the phone connector accessory inserted beneath it.

Thankfully, unless you’re constantly switching between resolutions or frame rates, most of the functions you’ll want to use can be accessed from the multifunction button, leaving the screen for simpler tweaks like setting the part of the frame where you want the image exposed or picking an object for the camera to automatically keep in focus.

If you want more immediate access to the camera’s advanced functionality, attaching it to a smartphone is a great way to achieve that. The only problem is that this turns the Osmo Pocket from a device that can comfortably be used with one hand into something that feels like it needs two hands to operate properly. For me, this trade-off doesn’t make sense.

Without a phone attached, you can shoot within 10 seconds; using a phone adds a couple of seconds of setup. With the Android device I was using (a Pixel 3), the phone was clever enough to open the companion DJI Mimo app automatically every time I plugged the camera in. It was never as quick as opening the camera app on my phone, but it was fast enough that I rarely missed something that I was intending to capture.

Although there are a fair amount of additional features like time-lapses, panoramas, and motion-lapses for those who want them, the Osmo Pocket is at its best when you’re just walking, shooting, and letting the three-axis gimbal do its work.

The video above should give you a better idea of the quality of the footage that the DJI Osmo Pocket is capable of.

I was almost ready to believe that I was going to effortlessly create Kubrick-esque steady-cam shots before I started using the Osmo Pocket for myself, but the reality was a lot more modest. Yes, you can try to steady your shots so they glide through a space, but in my experience, you’ll always be able to see the camera bob slightly with each step you take, no matter how careful you are. If you take less effort, then your footage starts to look like a scene from a first-person shooting game, and that’s especially true if you try running with the camera.YOU’LL NEED TO BE PREPARED TO ADJUST SETTINGS SO YOUR SHOT ISN’T OVEREXPOSED OR UNDEREXPOSED

The quality of the footage I captured with the Osmo Pocket was also good. Colors are vibrant (if a touch oversaturated). There’s a little bit of noise when you’re shooting in 4K, but the detail was generally good. Unfortunately, the camera’s low-light performance wasn’t quite as strong. I recorded a fair amount of footage on city streets late at night, and there was plenty of noise visible in the resulting shots.

For the most part, you can get away with pointing the camera at whatever you want to shoot and pressing the record button, but you’ll still need to be prepared to manually adjust settings in order to make sure your shot isn’t overexposed or underexposed. At one point, I tried to capture a building against a bright afternoon sky, and the detail of the building was almost entirely lost in shadow because I didn’t tap the building to tell the Osmo Pocket to expose for it.

Along with supporting multiple resolutions, the Osmo Pocket can also be switched between 30 fps and 60 fps. I spent some time playing around with the different options before settling on 30 fps as the one that offered me the best mix of video quality and file sizes.

The aforementioned time-lapse feature is one of the real highlights of the Osmo Pocket. It can either do a static time-lapse or it can pan between two points. Setting up the latter is surprisingly simple to do; you place the Osmo Pocket on a stable surface and then physically rotate its gimbal to indicate the time-lapse’s start and end points. The only problem here is that the Osmo Pocket isn’t exactly designed to be stood up like this, and I was constantly worried that the wind was going to blow it over whenever I tried capturing a time-lapse outside. A wireless module gives the camera a wider, more stable base, and it also lets you wirelessly control the Osmo Pocket from your phone, but it’s an optional accessory that costs around $100.

The Osmo Pocket is also capable of shooting in slow motion, where you’ll be able to capture at 120 fps to create a 30 fps video. Unfortunately, when I tried the mode, the footage came out looking very noisy and grainy, and it was a definite step down from the camera’s normal quality. In the end, this was the mode with which I spent the least amount of time, which is a shame since it could have been such a useful feature.THE OSMO POCKET IS TAILORED TO THE VLOGGING GENRE, WHICH MAKES ITS MEDIOCRE AUDIO A LETDOWN

Qualms about the quality of its slow-motion recording aside, overall, I liked the quality of the video footage that the DJI Osmo Pocket produced. However, audio was more of a letdown. Part of it is an ergonomic oversight. The Osmo Pocket has two microphones, one just above the recording button and another on the bottom of the device, and if you’re not careful, you’ll rub your hand all over both of them as you change grip positions. I got better at not holding the camera “wrong” with some practice, but ultimately, the Osmo Pocket’s audio always sounded like it was recorded from a small built-in microphone — because it was. GRID VIEW

Considering how geared the Osmo Pocket is toward the vlogging genre, it’s fair to expect better sound quality from it than a typical tiny video camera. DJI sells a small USB-C to microphone jack converter for the camera, and there are also mics available that connect directly over USB-C. You’ll want to verify that third-party accessories work before buying one for yourself. If you intend to do any serious vlogging with the Osmo Pocket, I’d seriously think about picking up an external mic to use with the camera.

You can also use the DJI Osmo Pocket to take photographs. You can switch to this mode quickly by tapping the multifunction button once. I was surprised by how much I enjoyed this mode, given that shooting photos is almost an afterthought with a camera of this kind. It’s not that the photographs are especially good — I’d say they’re about on par with an average smartphone camera — but quickly taking them is very easy to do. Whenever I take a photo with a smartphone or standalone camera, I always have to pause momentarily before I take the first shot to avoid blur from the motion of me raising the camera. With the Osmo Pocket, this wasn’t nearly as much of an issue. I could move the camera around, snap shots, and worry far less about making sure it was steady before pressing the shutter button. That’s the magic of the gimbal at work.TAKING PHOTOGRAPHS WITH THE VIDEO-FOCUSSED CAMERA IS A SURPRISING HIGHLIGHT

If you’re a more considered photographer, then you’ll likely do better with a proper camera. In particular, I often found it hard to frame subjects properly with the Osmo Pocket. Not only is the camera’s screen really small, but the stabilization meant that it could be hard to tilt the camera to make sure the scene was level. I’d try to tilt the camera, and it would work to cancel out the movement. It was often a frustrating experience. GRID VIEW

DJI’s Osmo Pocket does a great job of delivering on the capabilities of its form factor. It’s compact, easy to use, and I liked the quality of the video footage it produced (even if its audio falls short of its aspirations as a vlogging camera). But it’s a harder camera to recommend than other portable solutions for shooting video because of its price and lack of versatility. It’s not as rugged as an action cam, and it’s not as cheap as a standalone gimbal for your existing smartphone.

The DJI Osmo Pocket is a great example of a gadget that’s designed to fit a particular form factor. It really is tiny for the job that it does, and if that’s the overriding priority for you, then there’s little else out there like it. But if you don’t need the ergonomics and pocketability, then you might be better served by a more general purpose alternative.